One half of the City’s beloved old Jessop Hospital, the Grade II listed Edwardian building, has been targeted for demolition. Recently appointed estate manager Keith Lilley has been working closely with Chris Miele of Montague Evans (favoured by Tesco for getting supermarkets into “archaeologically sensitive locations”) to this end . Demolition will gain 10% space for a huge new Engineering building which the planning department themselves branded as basically “an ungainly big box”.

The decision by councillors to approve this application is shrouded in controversy – Freedom of Information requests have revealed the entire planning department, including head of planning and head of development had initially opposed these plans. It doesn’t take much imagination to realise what has happened.

Sheffield City Council ended up by saying demolition could be justified because of a clause in the National Planning Regulations, NPPF, paragraph 133.  This appears to leave it open for a council to approve a plan to demolish a listed building purely on the basis of a public benefit to be gained, even where, as is the case with this application, the benefit is purely economic.  We contest that it is impossible to apply this argument without a clear comparison between cases, showing what the public benefits to be gained would be.  Yet the public benefit gained by this 10% extra space was never demonstrated or even, by Council Officers own arguments, properly evaluated by the University, for they didn’t conduct any separate case studies to show the public benefits that could be gained by schemes that involved keeping the Grade II Listed building.

Moreover, the argument put forward by the Council, using para 133 of the NPPF, wasn’t even one that Sheffield University felt able to use.  Sheffield University had tried to argue that paragraph 134 of NPPF could be used.  This hinges on the idea that, as loss of the Edwardian building would not amount to significant damage to the principle listed building (which they claim is the Victorian building) then the small gains acquired by this 10% can be justified as being in the public benefit.  Sheffield University clearly thought it would not be possible to argue that these public benefits could override the importance of a building listed in its own right.  For this reason they attempted to argue, counter-intuitively,  that actually the Edwardian building was not a building listed in its own right.   With days to go before the 17th December meeting Sheffield University were still clinging to this argument, indeed wheeling out barristers in vaguely threatening e-mails to the Council.  They were here trying to argue, that as the building wasn’t listed in its own right, the application did not need to be referred to SoS!

This claim, that the Edwardian building is merely secondary, has been rejected by all agencies consulted regarding this application, not least  Sheffield City Council’s own Conservation officers.  Indeed Sheffield University’s own specially commissioned research, by N.Hitchin, suggests that, at a National level the two hospital buildings together give a remarkable insight into Victorian history:

“To find one hospital both designed and updated by a single architect is, in itself, of value.  But the fact that Sheffield was the provincial city that was to provide crucial data to Whitehall at the time of the formation of the NHS raises the question of the broader national significance of all health care institutions in this city.  And because the Jessop Hospital has this local and regional significance, in architectural history, we have to consider too whether its significance is raised by association with the fundamental national role of the city in the foundation of the health service. This is the broad view”.

It should be noted that Hitchin’s report was commissioned ahead of a previous scheme, approved in 2009, which involved retention of the Edwardian building.  We can be quite sure what his feelings would have been about a scheme involving outright demolition of the building. 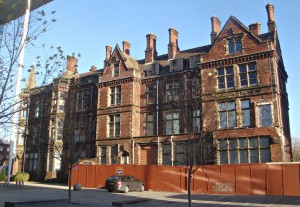 But, if the University’s justification for demolition (using para 134 NPPF) was rejected, as it must have been,  then how did Sheffield City Council end up approving the application?  This is the remarkable thing.  We know that the planning officers were opposed to the application, and we know that they had been instructed that the scheme would nontheless be approved on the basis of economic benefits.  It transpires that Council Officers put forward their own argument to justify demolition.  Sheffield City Council have have taken the outrageous step of arguing that, yes, this is a precious listed building, close to the hearts of the people of Sheffield and of National importance historically, but, for the economic benefits gained by the 10% extra space, demolition can be justified, on the basis of ‘public benefit’, para 133 NPPF.

If this application is approved, it will be of national significance, for it will have created a precedent where a Council is able, at will, to demolish Grade II Listed building on the basis of the uncompelling and untested arguments of public benefit.

By the end of March the Secretary of State should be close to knowing whether to ‘call in’ or ‘rubber stamp’.  We urge Eric Pickles to intervene in this case and ensure that councils across the country behave in a responsible way and give due regard to the status of this Nation’s listed buildings when they make planning decisions.

Readers can sign our petition to Eric Pickles here and can email him here.